5 things you didn’t know about riding side saddle

Traditional and lady-like, riding side saddle is the epitome of equestrian elegance and is enjoying a huge resurgence in the UK and around the world, thanks in no small part to the ‘Downton Abbey effect’ with Lady Mary not only hunting to hounds but even having a go at racing side saddle!

Riding side saddle enables the rider to sit sideways rather than astride a horse. The style was developed in European countries in the Middle Ages as a way for finely dressed women in skirts to ride horses with the dignity and grace expected of them.

Greek vases and Celtic stones show the earliest pictures of women riding sideways. Medieval pictures show women seated sideways or perched on a padded pillion seat behind a male rider. Ninth century depictions show a small footrest, or planchette added to the pillion. However, the lady was little more than a precariously balanced passenger and had little control over the horse.

In the 14th Century Anne of Bohemia rode sideways on a chair-like saddle, complete with a foot rest. This position understandably didn’t allow much control over the horse so the rider usually had to be led. By the 1600s Catherine de Medici improved rider control somewhat by establishing a forward facing position with the right leg hooked over the pommel and the the left leg in a stirrup.

The 1830s saw the revolutionary introduction of the leaping head by Jules Pellier. This inspired second pommel, which helps to hold the left leg in place, is still in use today. The rider hooks the right leg round a fixed pommel while the lower right leg rests on the horse’s left shoulder. Meanwhile the top of the rider's left thigh is positioned under the adjustable leaping head to give added security and the left foot is placed in a stirrup.

The leaping head gave ladies the capacity to gallop and ‘leap’ fences safely, opening up all manner of equestrian sporting opportunities for them but without ruining their need to look elegant and respectable on a horse.

During her reign, Queen Victoria rode side saddle along with other women of status who wanted to be able to keep up with their men. Another notable side saddle equestrienne was the Empress of Austria or “Sissi” as she was affectionately known as, who thought nothing of galloping across the English and Irish countryside following hounds, jumping whatever hedge or rail stood in her path.

For those wanting to learn more or even try it for themselves, The Side Saddle Association with over 1,200 members from Great Britain & around the world is most welcoming to new members with numerous ‘have a go’ days organised around the country. For more details see their website: http://www.sidesaddleassociation.co.uk/

https://en.m.wikipedia.org/wiki/Sidesaddle
The Art of Side Saddle by Rosamund Owen

Summer can be a lovely time for horse-riding, but high temperatures carry health risks for your horse. Hot weather can lead to dehydration, lethargy, sunburn and stomach problems that may even include colic. What can you do to help avoid these hazards and keep your horse cool?

Your horse should always have access to fresh water, but don’t be tempted to make it icy cold – 20°C is about right. 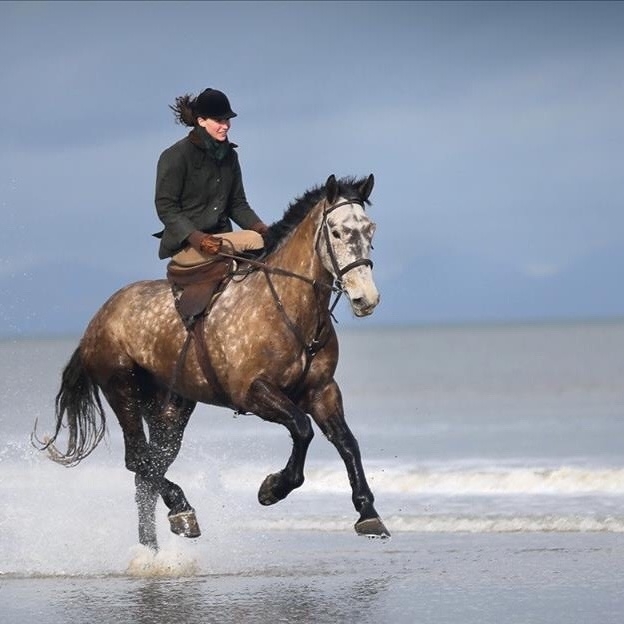 I'm Irish but studied at the University of Veterinary Medicine in Budapest, qualifying in 2007 with my degree & a doctoral research thesis. I started my career with an equine internship on the Curragh in Ireland for 12 months before working for an equine ambulatory practice for a further year. I wanted to gain equine reproduction experience so I followed this with a stud season, beginning in Argentina & then at the Beaufort Embryo Transfer Centre in Gloucestershire. Following that I worked at Rowe Equine incorporating the Equine Eye Clinic. When I got married I followed my husband (also an equine vet) to Norfolk where I now work for the Chapelfield Equine Clinic. My areas of interest are equine internal medicine, reproduction, ophthalmology & dermatology. In my free time I enjoy riding sidesaddle, sedately showing in the summer then galloping at speed hunting & racing in the winter!

Summer’s on its way, with the promise of warm weather, longer days, bright early mornings and balmy evening rides. We can tu...

5 things you didn’t know about riding side s...

Our latest HorseDialog guest blogger Dr Aoife Byrne is an equine vet and an intrepid side saddle rider. Here she explains the hist...

Three things you didn't know about the history of ...

Saddle up and learn about the history of the horse saddle. Several thousand years ago our ancestors worked out that a saddle of so...